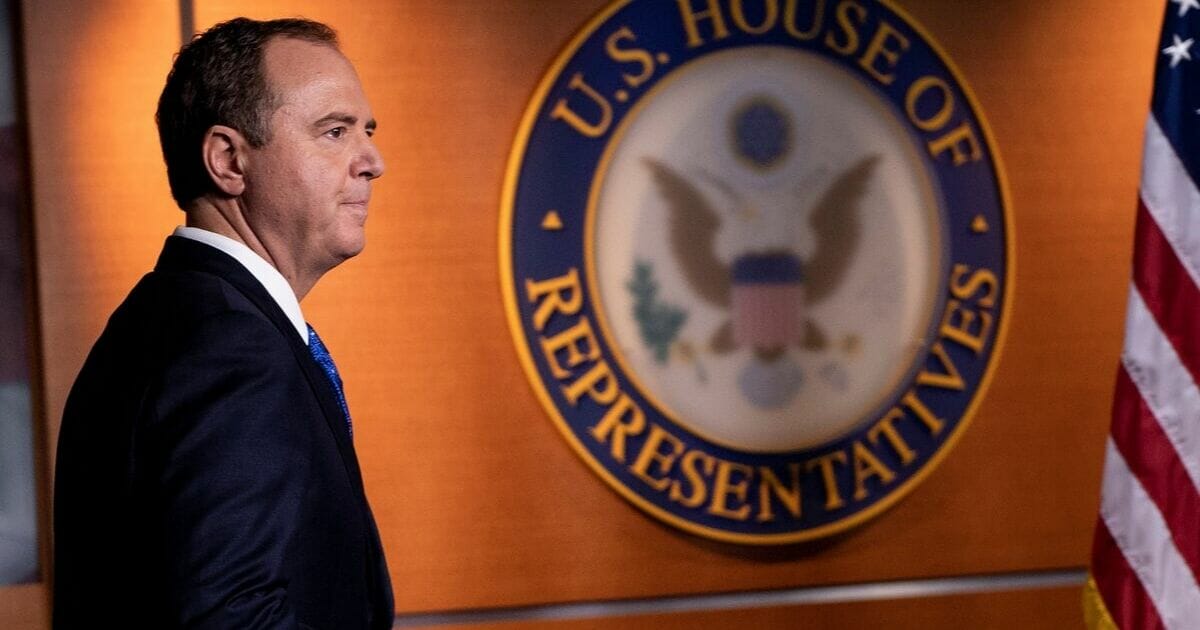 But a Florida Republican used the same day to remind the country that Schiff was caught not too long ago trying to do exactly the same thing himself.

And Schiff’s target was, naturally, the president he keeps accusing.

In a Twitter post, as Fox News reported, Rep. Dan Gaetz dug up a recording of Schiff being taken in back in 2017 by Russian radio hosts posing as Ukrainian elected officials claiming to have compromising information about the president.

And Schiff was all ears.

.@RepAdamSchiff is a hypocrite. pic.twitter.com/LFbGFBUG6r

The recording Gaetz posted was made in 2017, when Schiff took a call from radio personalities Vladimir “Vovan” Kuznetzov and Alexey “Lexus” Stolyarov. Kuznetzov was posting as Andriy Parubiy, a right-wing politician who was chairman of the Ukraine Parliament at the time.

As first reported by The Atlantic  in January 2018, the fake “Parubiy” told Schiff that the Ukraine government had obtained recordings of conversations showing that Russian agents had compromising information about Trump.

That material included nude photographs of Trump with a female Russian reality television star, which Russian President Vladimir Putin was supposedly using to blackmail Trump, according to a Daily Mail report from February 2018.

“Well obviously we would welcome a chance to get copies of those recordings,” Schiff told his caller.

Schiff’s office later told reporters that the congressman suspected the call was bogus from the beginning. And Schiff did make several references to contacting the FBI about the call and providing the agency with whatever information arose.

Check out the whole recording here:

However, if Schiff’s office did think the call was a fake, it was tough to tell. The Daily Mail reported that Schiff’s office went to considerable lengths to try to get hold of the material that was discussed.

According to the newspaper, Kuznetzov and Stolyarov had emails to show Schiff’s staff trying to make follow-up arrangements after the call.

Do you think Adam Schiff was really taken in by this phone call?

“I understand Mr. Schiff had a productive call with Mr. Parubiy, and that Mr. Parubiy would like to make some material available to Mr. Schiff through your embassy,” a Schiff aide wrote in an email to what she thought was Parubiy, according to the Daily Mail.

“Please let me know how best to arrange pick-up of those materials from your Embassy in Washington, D.C.”

According to the Daily Mail, the FBI would neither confirm nor deny whether it had received any notice from Schiff’s office about Ukraine officials peddling compromising information about the president.

Now, there’s no way of knowing for sure whether Schiff and his office knew the phone call was fake, but it’s tough to believe that an American congressman would choose to spend eight minutes on the phone with a caller he knew to be bogus.

It’s tougher to believe that his staff would try to follow up to get information discussed in the call if everyone knew it was faked.

But what’s absolutely no problem to believe is that Schiff is on an audio recording doing exactly what he’s accusing Trump of doing – with nowhere near the same evidence.

For all the Sunday talk show blather, the shifty California Democrat is still the same man as the one who assured the media repeatedly that there was ample evidence of Trump “collusion” with Russia – right up until the investigation by special counsel Robert Mueller ended up finding nothing of the kind.

And yet he keeps peddling the same wares, hoping the American public, at some point, is going to buy.

Gaetz, now in his second term in Congress, but first in the minority party, has been building a reputation recently for needling the Democratic majority.

This time, his tweet had it right on the money:

Schiff is a hypocrite.