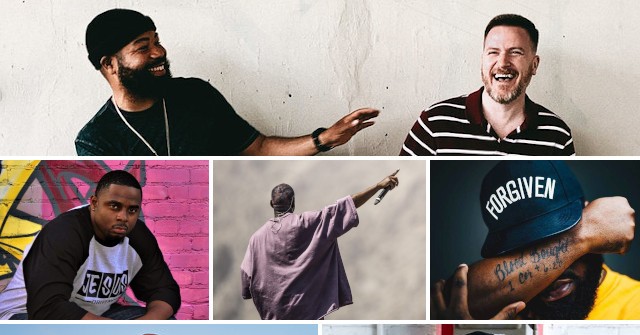 Another year, another list of Christian hip-hop I’ve enjoyed.

A major caveat: I’m certain I’ve missed some great music, as I found out just hours after publishing my 2018 thoughts. Any omissions are likely from lack of exposure and should not be seen as a slight.

Can anything good come from Canada? Well, you have your answer in Toronto’s Die-Rek, an inventive producer who brings some no-frills lyrics with his deep, gravelly voice. The Dying Ones is his first real solo album after at least a decade of mixtapes, EPs, and features, and the Canuck makes his mark with some of the most unique arrangements I’ve heard this year. Take, for example, the single released this January, “I’m So Potential.” The polyrhythms in the bass and the high hat form a groove that’s burrowed into my brain since the very first listen. It’s IDM for hip-hop heads! The theme of the record is rather explicit: encouragement for the weary. As such, the soundscapes are grimy, cold, and ethereal — the irregular beats an invitation press onward to our future glory, even if all we can manage is a limp.

Eshon Burgundy — For the Love of Money

You know why it’s hard for a rich man to go to Heaven? Because in his mind he’s already there, that’s the deception

These tracks don’t have any obvious samples, sounding instead like original jazz and R&B compositions. There’s more social commentary here than on his past releases, and it’s all compelling, original thought rather than regurgitation of some influencer’s talking points. “Cotton,” the single that accompanied the album’s release, is an exposé of U.S. monetary policy that the Mises Institute would license if it cared about breaking out of the libertarian bubble. “Barry” is a memorial for an uncle who was fatally tased by police, “For.Wmn” a putdown of “conscious” men who bring violence into their homes. All through these topics, Eshon delivers brilliant lyricism hyper-focused on identifying and defeating ungodly beliefs.

Fresh bread, but these guys settle for cold chicken / Attention is a drug, I noticed your nose dripping

Philadelphia’s Tone Spain really wants you to live a holy life since you’re a servant of a holy God. I mean, really, really wants you to live a holy life! In his songs, Spain has railed against “hyper-grace” and men who use Jesus as a means to their own little fiefdoms, urging his listeners instead to obey God’s Word zealously. He gets on that soapbox a few times during Loose Gems, with beats that are often somber and urgent, but we also learn about his life story and see his lighter side — particularly on the single above, “Bar Mitzvah: Shnayim.” It’s puzzling that “Unclean,” a powerful track from March, didn’t make the cut, as it’s a perfect fit sonically and thematically and would only bump the runtime above 30 minutes.

This record from pastor and producer Chrys Jones doesn’t sound very flashy at first glance, but it’s slowly and continually hooked me as a daily listen. At once dingy and shimmering, Trinity is full of heady theology over delightfully imperfect samples — from the days when music wasn’t all digitally tuned and quantized. Jones’ previous work, Meno, made it clear he’s a fan of Puritan meditation practices; these concise nine songs sound like he created a soundtrack for that discipline, with scripture-soaked reflections on God’s attributes and His work through history.

We the change that we want to see / Believe you me, victors not victims / Let’s take time, get together and listen / Help these kids stay out of the system

This prolific Michigander has put out his third consecutive annual release, a declaration of positivity that’s not afraid to tug at the heartstrings. Like A Pond Apart and Mind Over Matter, 88 to Now enlists a single producer for all tracks, and Newselph — Sareem’s partner this time around — alternates between party-bumping funk (“Kick’n It,” “The Feels”) and somber reflection (“No Fly Zone,” “Piece of Peace”). Among many standouts, the bittersweet “I’m Right Here” is its most personal, with Sareem counseling his own children about how they can weather racism and other tough issues waiting to destroy them as they grow, broken up by little vignettes of dialogue featuring the little ones discussing their likes and lessons.

Another Canadian? I’m about to get uninvited to the July 4th cookout, but it’s worth it for this album from Ontario’s Rel McCoy. He’s been around for a while, and he’s always had a vein of Christian thought running through his music, but on A Different Crown, he’s much more explicit on almost every song. It’s not “lyrical theology” per se; it’s more just approaching daily life through the lens of Scripture. Topics like dating, money, and family dysfunction all get satisfying treatments. One of my favorites here is “Hallelujah,” where the aforementioned Die-Rek appears as a guest — a kind of coming-out song, where he can no longer help but center his identity on Christ. It’s sentimental but not kitschy — a perfect illustration of letting go of burdens through worship.

You won’t ever be the same when you call on Jesus’ name / Listen to the words I’m sayin’, Jesus saved me, now I’m sane

Jesus Is King — ah, what a title! — is one of the year’s most-dissected and debated works, with Kanye West’s impassioned conversion fueling his first true CHH work following a few lip-service songs about God over the years. It’s not terrible, it’s not exceptional, but JIK is undeniably moving and leaves us wanting more. Ever since The Life of Pablo, I’ve found much of Kanye’s work half-baked and unmemorable, and even though JIK is clearly pretty rushed, the final product is engaging and endearing. The beating heart of this album is “God Is,” a gospel ballad that will make you tear up just reading the lyrics: “I can’t keep it to myself, I can’t sit here and be still / Everybody, I will tell ’til the whole world is healed.” To hear this from a man who was lending his creativity to PornHub at the start of the year… yeah, God is great.

For a record without much rapping, the single “Follow God” is a great convergence point between the old and new Kanye — staccato delivery, references to Proverbs, and the decade’s pithiest putdown of social media. Note the parallels to his 2011 music video “Otis,” where Kanye and Jay Z did donuts with a stunt car on a closed track, models in the back seat. On that song, West was at his commercial peak, romping around with a father figure — who has since become estranged — but surrounded by pretty-looking rentals. Now, he transfers that same imagery into a setting not made by human hands, property that he owns, and he’s doing those donuts with his real-life father, no longer estranged. His thrice-repeated anecdote about arguing with his dad, an admission that he is still early in his journey toward Christlike character, isn’t delivered in shame but in hope.

I put my gun down and pick up the canon / 66 shots in the clip, let’s get it cracking

There’s Christian rap, and then there’s gangster Christian rap. SoCal’s H.U.R.T. lays down the gospel over slick, aggressive trap beats you’d get from the likes of a DJ Mustard, part of his ministry to the streets of Riverside. This isn’t music about a sweet, cuddly Jesus who’s begging you to accept him into your life; this is about the Kingdom coming in power, with a huge emphasis on spiritual warfare; you think you’re running with a strong outfit, but God’s is stronger, so repent or be destroyed! H.U.R.T. does show a softer side — for instance, a song about struggling with infertility — but if you know anyone who find Christian music irrelevant and feminine, this is definitely an album for them to hear.

Simplistic, we eat brisket and speak with it / But can’t control the tongue, like the bridle on Seabiscuit

This isn’t the first project where the Christcentric label has put together a song-by-song adaptation of a book from the New Testament, but it is definitely their best. The production is shockingly good compared to previous releases, with the aforementioned Chrys Jones behind quite a few tracks. And the lyrics, spread out across quite a few emcees, are rather consistent and illuminating takes on the text. You’d never have guessed that “Faith without works is dead” could be an earworm hook until now.

Said you’re searching for divine proof / Just take a look at creation, you know it’s fine-tuned / Life is a miracle / If you’re existing, the evidence is empirical

As I wrote a few months ago, what’s great about Hazakim’s Origins is that it’s more worship than pedantry. Music-wise, it’s a gem. There comes a point in every artist’s career when their production value really syncs up with their ambitions; as great as 2009’s Theophanies and 2014’s Son of Man are, there are moments here and there where the mix is off — or just not up to that “pro” level. After several years as a producer for other artists, beatmaker Tony is now solidly and confidently operating at that level, digging up obscure Israeli pop samples and punctuating them with shofar blasts. I can’t stress it enough; this album is something very special: an uncommon topic in music (creationism) approached by two artists of an uncommon theological background (Messianic Judaism — uncommon in hip-hop, that is) with an exceedingly rare ability to translate scientific facts into entertaining and inspiring lyrics.