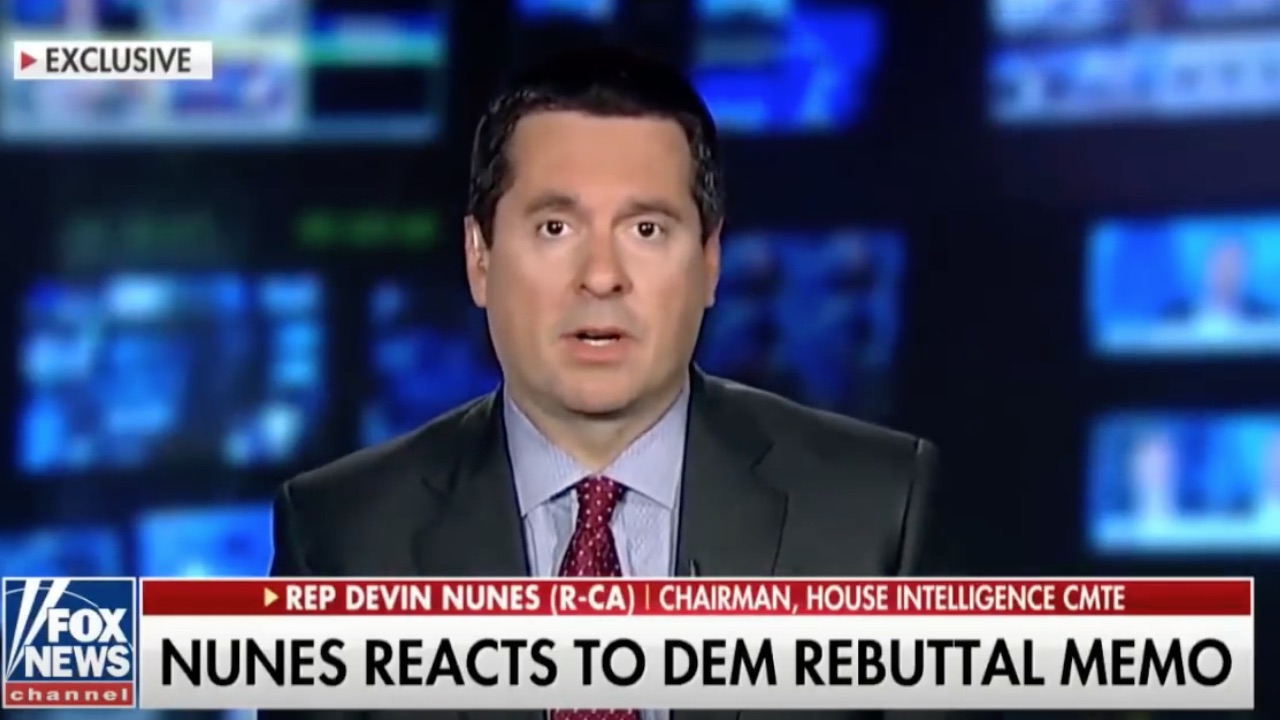 On Sunday’s Fox & Friends, House Intelligence Committee Chairman Devin Nunes assessed that committee’s Democratic minority memo issued Saturday in response to the Republican memo published in early February as “scary.” He also had harsh words for the establishment press, which has dishonestly pretended that the Dems’ memo refutes the GOP’s effort: “The media in this country is dead.”

In the full interview, Nunes described the Democrats’ response as “scary” because:

… you have a political party in this country actually saying, “Don’t worry, American public, it’s okay. We do this all the time. We’re going to go dig up dirt on our opponent, get it from Russians, get it from the Brits and we’re going to take to it the FBI and open up an investigation into another campaign.”

Per Nunes, Democrats led by Congressman Adam Schiff want America to believe that this is how business is normally conducted in Washington. Maybe they’re right, if they’re referring to standard operating procedures during the Obama administration.

Fox’s Ed Henry asked Nunes about the press’s reaction to the Democrats’ memo. The congressman, after describing additional phases he expects in the investigation, answered with a harsh critique:

ED HENRY, FOX NEWS: Mr. Chairman, you faced an unrelenting assault ever since you went down this road. Look at the headlines just overnight: New York Magazine, “The Nunes Memo Is Fake and the Russia Scandal Is Very Real”; Vox: “The Democrats rebuttal to the Nunes FISA memo Is Utterly Devastating”; Daily News here in New York, “Democrats Blast holes in Nunes Memo With Volley of Facts, Logic.” I want to give you a chance to respond to that.

The New York Times, according to an Investor’s Business Daily editorial, characterized the Democrats’ memo as a “forceful rebuttal.” The full IBD editorial concisely rebuts that fantasy, accurately contending that it “ends up confirming the most damaging claims made by critics.”

DEVIN NUNES: … The one thing that’s clear in this whole Russia fiasco is that the media is dead. There is no — and I apologize to you guys that are in the media.

PETE HEGSETH: I separate myself.

NUNES: But the media in this country, the fair and balanced media is for the most part — I mean 90% of them are hard left. They rely on clicks to make a living. So when they attack people like me, it actually means that I’m over the target, and I’m getting to them because they have to attack me in order, number one, to please their masters, their billionaire masters, and number two, they also have to do it because they’re in on this. Don’t forget, many of the people that criticize me were shown the … dossier. They were shown the Christopher Steele dossier in, you know, back — during the 2016 election.