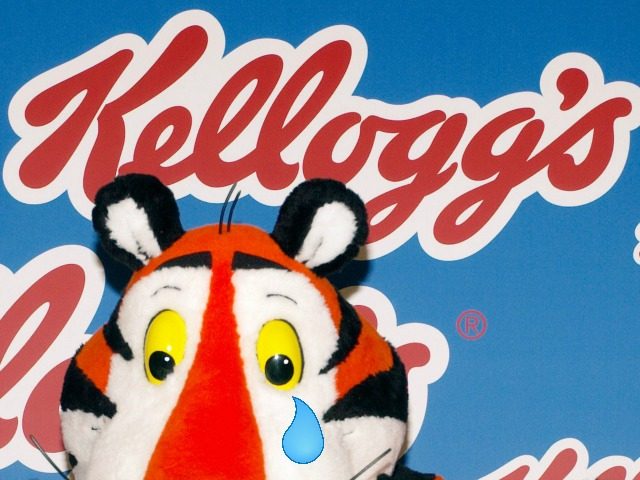 Shares of leftwing cereal maker Kellogg Co. fell by more than 7 percent Wednesday after the company said it expects profits to be flat for the year, a retreat from its earlier projection of 5 to 7 percent growth.

Kellogg’s stock was down as much as 9.6 percent in morning trading but recovered some of the early losses as the broader market moved higher.

The company said its profits were hit by investment in single-serve packages of its snacks like Pringles. The company is spending money in an attempt to grow its snacks as sales of its breakfast cereal products continue to decline.

As Breitbart has reported, Kellogg is effectively controlled by a leftwing foundation:

Every time an American family picks up a box of Kellogg’s cereal at the grocery store, it is contributing to the wealthy radical leftwing foundation that agitates for open borders, supports George Soros’s Open Society Insitute, and other leftwing causes.

The W.K. Kellogg Foundation is the largest shareholder of the Kellogg Company. According to its 2016 tax filing, the Kellogg Foundation’s trust owns approximately $5.2 billion of stock in the company, about 20 percent of the company’s equity. The other large holders are mostly passive investors such as mutual funds and their ownership is a fraction of the foundation’s. That means that the foundation effectively controls the famous cereal company…

Last year, the Kellogg Company called for a blacklist of Breitbart, saying that the news organization did not reflect its values. This prompted a #dumpkellogg’s boycott in response that AdWeek described as inflicting huge damage to the company’s reputation.

It is not just cereal purchases that contribute to the leftwing causes championed by the Kellogg Foundation. Purchases of Pringles, Pop Tarts, Cheez-Its, Keebler and Famous Amos cookies, Eggo waffles, and Morningstar Farms veggie burgers all help fund the Kellogg Foundation’s political activism.

The foundation has donated millions to the Mexican nationalist organization, La Raza — the group founded to “reclaim” the southwestern United States for Mexico. In 2015, the foundation gave $2,400,000 to the National Council of La Raza, Breitbart reported.
Kellogg executives say they are investing in marketing the snack products with the goal of boosting sales. The sell-off in the stock may indicate that investors doubt this strategy will pay off. Sales of its snacks, the company’s biggest unit, fell 3.5 percent in the most recent quarter.

Sales of Kellogg’s U.S. breakfast foods dropped 1.3 percent during the third quarter.  A recall of 1.3 million cases of Honey Smacks cereal, which were potentially tainted with salmonella, dented sales during the quarter.

Kellogg wants to increase prices but faces consumer resistance to paying more for the same products. To outwit consumers, Kellogg “said companies have to get creative with pricing, using new package sizes and new flavors to justify price increases,” according to the Wall Street Journal.

“The days of straight list price increases are gone. It would lead to a decrease in consumer demand,” Mr. Cahillane told the Journal.