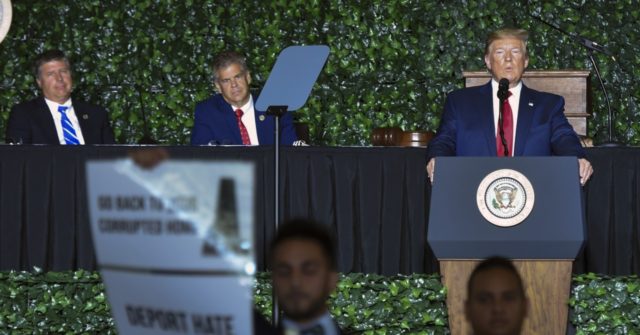 Supporters of President Donald Trump shouted down a few protesters who disrupted his speech celebrating the 400th Anniversary of the Jamestown, Virginia settlement on Tuesday.

As the president spoke, a small group of protesters began shouting, “Mr. President, you can’t send us back! Virginia is our home!”

During the speech, Trump praised the first men of the Virginia Company who founded the town of Jamestown despite incredible danger and suffering.

“They came in search of opportunity and fortune and they journeyed into the unknown with only meager supplies, long odds, and the power of their Christian faith,” he said.

He recalled that the population of 500 settlers sank to 60 people before they finally got new supplies and settlers to help them restore the town.

“Where others had typically perished, the Virginians were determined to succeed,” Trump said, praising the leadership of Captain John Smith.

He praised the hardworking culture the men built, establishing a charter of law in 1619 that became the basis for law on the continent.

“It was the beginning of a barbaric trade in human lives,” he noted. “Today in honor, we remember every sacred soul who suffered the horrors of slavery and the anguish of bondage.”

“Self government in Virginia did not just give us a state we love, in a very true sense it gave us the country we love, the United States of America,” Trump said.

The president noted the traditions of law, religious freedom, and other Democratic values began in Jamestown.

“In America, we are not ruled from afar, Americans govern ourselves and so help us, God, we always will,” Trump said.