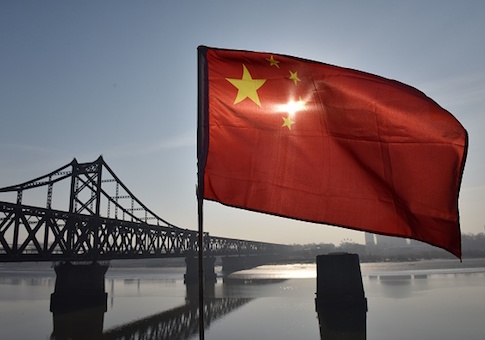 A leading member of Congress is demanding that Capitol Hill administrative authorities investigate how and why Chinese state-funded propaganda is being delivered each day to scores of members in both legislative chambers, according to a letter to be sent Monday to the House chief administrative officer and the Justice Department.

Rep. Jim Banks (R., Ind.), a member of the House Armed Services Committee, demanded in a new communication obtained by the Washington Free Beacon that congressional authorities and the Department of Justice begin providing answers about why China Daily, a notorious Communist Party mouthpiece, is winding up on the doorsteps of nearly every congressional office each morning.

The Chinese Communist Party mouthpiece has long touted its wide distribution across Capitol Hill and new information obtained by Banks indicates that a Chinese state-controlled entity is bankrolling the effort to deluge congressional offices with communist agitprop.

The issue has long simmered in the background of congressional efforts to stem China’s dissemination of propaganda within the United States, not just on Capitol Hill but at many American universities and schools. Opponents of this stealth influence campaign by China, like Banks, are demanding that Congress’s oversight authorities address the issue.

"I was hoping you could answer a couple questions to help me understand how Chinese state-propaganda finds its way to my office’s doorstep each morning," Banks wrote in a letter to Philip Kiko, chief administrative officer of the House of Representatives. "Please outline the process by which publications are approved for distribution in Congressional offices."

"I’m certain you are personally opposed to foreign agitprop like the China Daily," Banks wrote in the letter. "So, there must be a legal or administrative roadblock preventing the removal of state-supported propaganda from congressional circulation. Please include it in your explanation. Is there any legislative action I could take which would allow you to overcome this obstacle?"

"If we can’t win the information war in Congressional offices, how can we hope to win it in Hong Kong, or anywhere else?" Banks asked when reached by the Free Beacon for comment on his effort. "I hope Chief Administrator Kiko works with me to block China’s foreign propaganda campaign."

Banks, who sent copies of the letter to the Department of Justice, which oversees the investigation of foreign influence efforts, requested a public accounting "of all state-owned ‘news’ publications that are distributed to congressional offices."

It remains unclear at this point if China Daily is the only piece of communist propaganda being delivered to congressional offices each day. The Justice Department, under the Foreign Agents Registration Act (FARA), maintains legally required databases of foreign-controlled outlets like China Daily to provide transparency into influence operations conducted by foreign actors on American soil.

"The company distributing the China Daily, the National News Agency, openly advertises its reach on Capitol Hill," Banks said in his letter. "The companies’ [sic] website states, ‘We will work directly with you to achieve any congressional objective.’ The National News Agency has no scruples disseminating falsehoods on behalf of an authoritarian dictatorship."

The National News Agency group is an outside newspaper logistics company that "delivers a separate list of publications to Congressional offices, bypassing normal Congressional media distribution procedures," the letter states.

Banks further requested that congressional authorities provide a list of all the publications the National News Agency delivers each day in Congress.

China Daily is just one piece of a multi-billion dollar effort by the Chinese government to peddle influence across Washington, D.C., and the wider United States.

The paper is owned and funded by the Publicity Department of the Communist Party of China, "the agency responsible for monitoring and controlling all media produced in the one-party state," according to information provided by the lawmaker.

"China Daily’s increasing reach is part of a broader foreign disinformation initiative started by former premier Hu Jintao," Banks wrote in the letter. "The Chinese Communist Party committed $6.6 billion dollars to foreign propaganda efforts in 2009 and according to Foreign Agent Registration Act (FARA) receipts, has spent over $20 million on the China Daily since 2017. China’s massive financial commitment speaks to the seriousness of their effort to sway foreign sentiment."

The publication, in addition to portraying China in a positive light, also has worked to excuse the communist regime’s mass human rights violations.

While Congress could remedy the issue via new legislation, Banks expressed concern that process would be too time consuming and fail to properly address China’s influence operations.

In an effort to expose the paper for what it is, Banks requested that congressional authorities immediately move to put disclaimers on the publications outing them as Chinese communist propaganda.

"Unfortunately, bills often proceed slowly, while the presence of Chinese-state propaganda in Congress demands an immediate response," Banks wrote. "If you’re unable to immediately stop the dissemination of foreign propaganda in Congress, I strongly suggest you mandate the inclusion of a disclaimer on all state-owned newspapers delivered to congressional offices. Such a disclaimer should identify the newspaper as propaganda and name the foreign government that produces and finances it."

"There’s a lot of rhetoric in Congress about ‘combatting Chinese influence’ and being ‘tough on China,’" Banks wrote. "Americans won’t take our claims seriously if we can’t prevent China from running a propaganda campaign in our own workplace. Mr. Kiko, your response to the above inquiries will help ensure Congress remains an independent body."