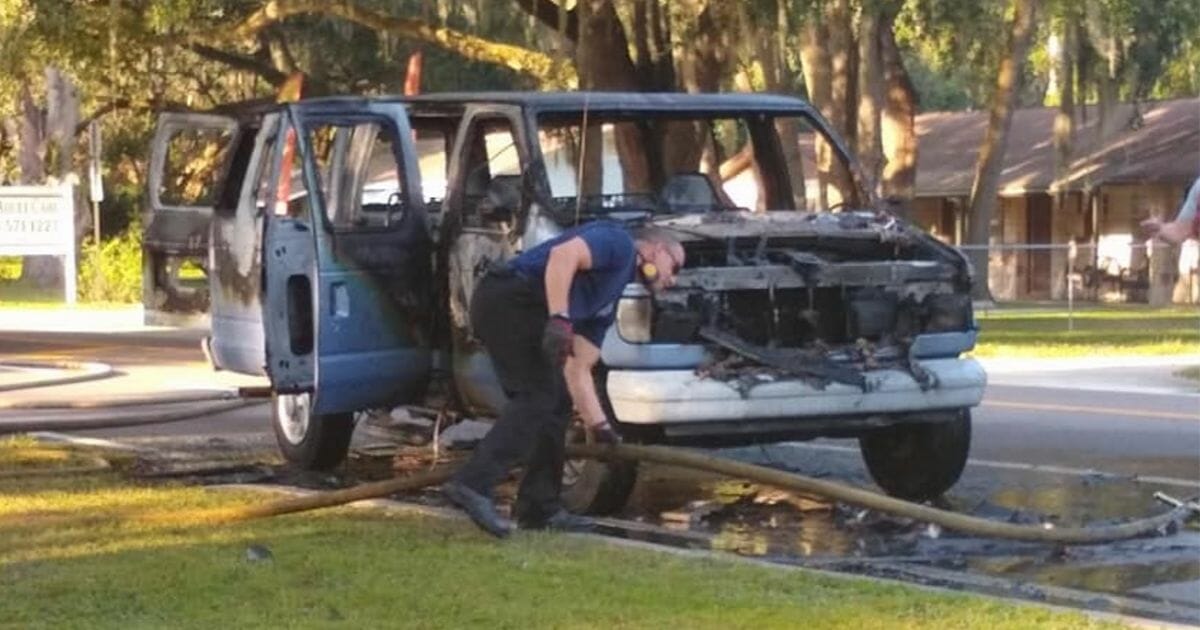 On Sept. 17, Ciara Danielle Gallup and her children experienced a terrifying accident when their family van caught on fire and exploded shortly afterward.

They were driving along when the mother of seven noticed something was wrong with their ’96 Ford E-350.

“Six of our children (ages 1, 3, 4, 5, 7 and 8) and I were inside the vehicle when I noticed the smell of burning rubber and flames coming from the hood,” Ciara wrote on GoFundMe. “I reacted by turning the van off immediately and shouting for the kids to get out and run to the nearest building’s sidewalk.”

She recounted how her second-oldest son, Bastian, who was with her in the car, jumped up and helped unbuckle his younger siblings. At only 8, he realized how dire the situation was and immediately got to work.

“I was just able to get my one year old when I looked back at the [flames] and see them starting to cover the windshield,” she continued. “As I gathered everyone, we ran towards a church. Looking back, the driver side seat was then in flames.”

“We are so grateful that everyone made it out before the flames quickly engulfed the rest of the interior … We are so thankful that no one was hurt.”

“All I really remember is just running out of the van and hearing explosions and stuff,” Bastian Gallop told WFLA.

Over the next few days, they recovered from their ordeal. The church they took refuge in helped find some more car seats for the family, since theirs were lost in the fire.

The children drew thank-you cards for the people who helped them out, some of the younger ones using their art supplies as a way to process the terrifying incident they’d just endured.

“My four year old, Savannah, drew a picture of the van during free time at VPK today,” Ciara posted on Sept. 19. “I asked her if she wanted to come with me to the church and give them her thank you cards, but she said she doesn’t want to go anywhere today, just home with mommy. So I guess today we’re just going to relax some more. The teachers at her school are very accepting of this whole thing, they are allowing her to talk about it and express herself.”

While the family was safe, their means of transportation had been destroyed, and so Ciara started a GoFundMe to try to raise funds to get themselves a new set of wheels.

“We didn’t have the savings to buy a new van on such short notice,” she told WFLA.

Thankfully, an anonymous donor saw their story on the news and felt compelled to help out. She had a 2013 Chrysler Town & Country in good condition that she wanted to gift the family.

“God put it on my heart to do it,” the unnamed good Samaritan told WFLA.

“I would have never thought I would be a person who gets to receive something as big and as nice as this,” Ciara said.

“I think it’s going to be way better than the old car,” Bastian added.

“Now that this has settled in a bit more, I have so many thank yous to give out,” Ciara posted on Sept. 26. “I was [speechless] during the interview, but now I can’t stop thinking about ways to say thank you.

“We cashed out the go fund me for new back tires and savings for full coverage towards the van we were donated. But not closing it just to make sure the money goes through. All donated money from now will be refunded and we appreciate all the help we received!!!”

Ciara referred to the donor as an “Earth angel,” and said she and her family are incredibly grateful for the generous gift.