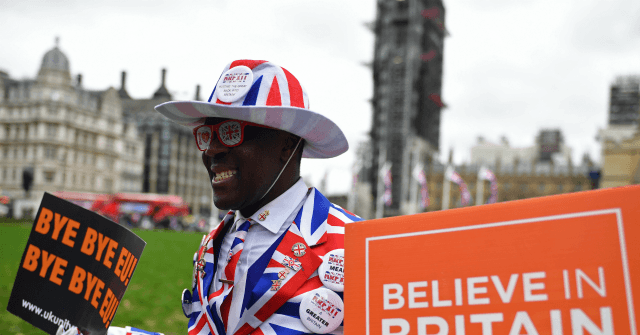 Nigel Farage has hailed today as a “massive victory for the people against the establishment” as the UK prepares to leave the EU at 11 pm.

“What happens tonight at 11 o’clock, we pass the point of no return,” Mr Farage said on Good Morning Britain on Friday. “Once we’re out, there’s no way this country will ever rejoin. This is a big moment in history.”

At last the day comes when we break free. A massive victory for the people against the establishment.

BREXIT DAY👏👏is here!! A massive moment, I plan to smile all day!

Brexit Party MEPs Claire Fox and Belinda de Lucy thanked activists and leave voters, with Ms de Lucy saying today “feels like we’ve stood on the shoulders of so many unsung heroes. Thank you SO much to all 17.4 million.”

Feels like we’ve stood on the shoulders of so many unsung heroes. Thank you SO much to all 17.4M.

Greetings from Auckland and Happy #BrexitDay! Enjoy these celebrations – every single one of the 17.4 million deserve it!

Journalist and keen royalist Joseph Afrane, who is often seen at pro-Brexit rallies bedecked in patriotic suits, was out in Westminster today bidding “bye-bye EU”.

The Conservative government, which finally delivered Brexit after three and a half years since the vote, also marked today on Twitter, with Number 10 releasing a video celebrating that “today is the day the UK is leaving the EU.”

Today is the day the UK is leaving the EU. pic.twitter.com/Zuhzl0l5sT

Some of the media splashed their front pages with celebrations of the historic day:

While Brexit campaigners like Patrick O’Flynn criticised the left-liberal Guardian for calling Britain a “small island” on their front page this morning, by quoting George Orwell who said: “England is perhaps the only great country whose intellectuals are ashamed of their own nationality.”

“England is perhaps the only great country whose intellectuals are ashamed of their own nationality.” (George Orwell) https://t.co/0VnKJ5Ss5P

Brexit-supporting newspaper cartoonists also took the chance to mark Brexit Day, and mock those who tried to block it since 2016.

Don’t rub their noses in it. In fact, don’t rub anything.#BrexitDay pic.twitter.com/hueVQ9AvNF

My latest cartoon for tomorrow’s @Telegraph

Subscribe to my weekly newsletter to receive my unseen cartoons: https://t.co/JNDhrYJMFH pic.twitter.com/9Kty0IFyeP

There was also congratulations from the U.S. ambassador to the UK Woody Johnson, who said: “You have no greater friend, ally, and partner than the United States.”

The countdown is on! The UK officially leaves the EU at 11pm tonight. My message to the United Kingdom is a simple one: you have no greater friend, ally and partner than the United States. #BrexitDay pic.twitter.com/7uLH6ujYHk