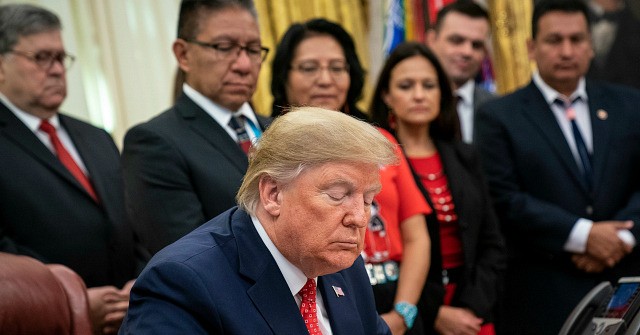 President Donald Trump has tasked three members of his Cabinet to work together to investigate the high number of American Indians and Alaska Natives who have been murdered or gone missing.

The task force “is composed of federal officials charged with enhancing the criminal justice response, consulting with tribal governments on potential solutions and empowering native communities with information,” a press release announcing the new campaign said.

“President Trump is committed to addressing systemic challenges in Indian Country, and this task force will develop and implement an aggressive, government-wide strategy to combat the crisis of missing and murdered American Indians and Alaska Natives,” Bernhardt said. “By working together and listening to impacted citizens and tribal communities, we intend to tackle these complex issues.”

“The disappearance and death of American Indian and Alaska Native people, particularly women and girls, is an especially tragic chapter in a long story of marginalization and trauma suffered by native people,” Barr said. “We are committed to addressing this challenge, to reducing the violence and protecting the vulnerable from exploitation and abuse.”

“The task force is eager to get to work to address the issues that underlie this terrible problem, and work with our tribal partners to find solutions, raise awareness, and bring answers and justice to the grieving,” Barr said.

“I am grateful that President Trump has made it a priority to tackle the tragic issue of missing and murdered American Indians and Alaska Natives,” HHS Secretary Alex Azar said. “Native Americans deserve safety and security in their communities, and HHS has a vital role in helping by providing culturally appropriate prevention and trauma informed services to victims and their families.”

“I am committed to working in partnership with President Trump, Attorney General Barr, Secretary Bernhardt, and tribal leaders and members to make a positive impact on this important challenge,” Azar said.

Trump has called the high rates of violence in the Native American community “sobering and heartbreaking.”

The announcement of the campaign detailed how the task force will address the issue:

“This initiative’s important to Indian Country and Alaska Native communities,” Sweeney told ABC News. “And if the current practice had been effective, we wouldn’t be here today.”

“Of almost 6,000 indigenous women reported missing in 2016, only 116 were logged into the Justice Department’s missing persons database, according to a report by the Urban Indian Health Institute,” ABC News reported.

As part of Trump’s executive order, Barr named Marcia Good of the Department of Justice as the executive director of the task force.

The task force will host its first listening session at the National Congress of American Indians’ Executive Council Winter Session in Washington, DC, on February 12.