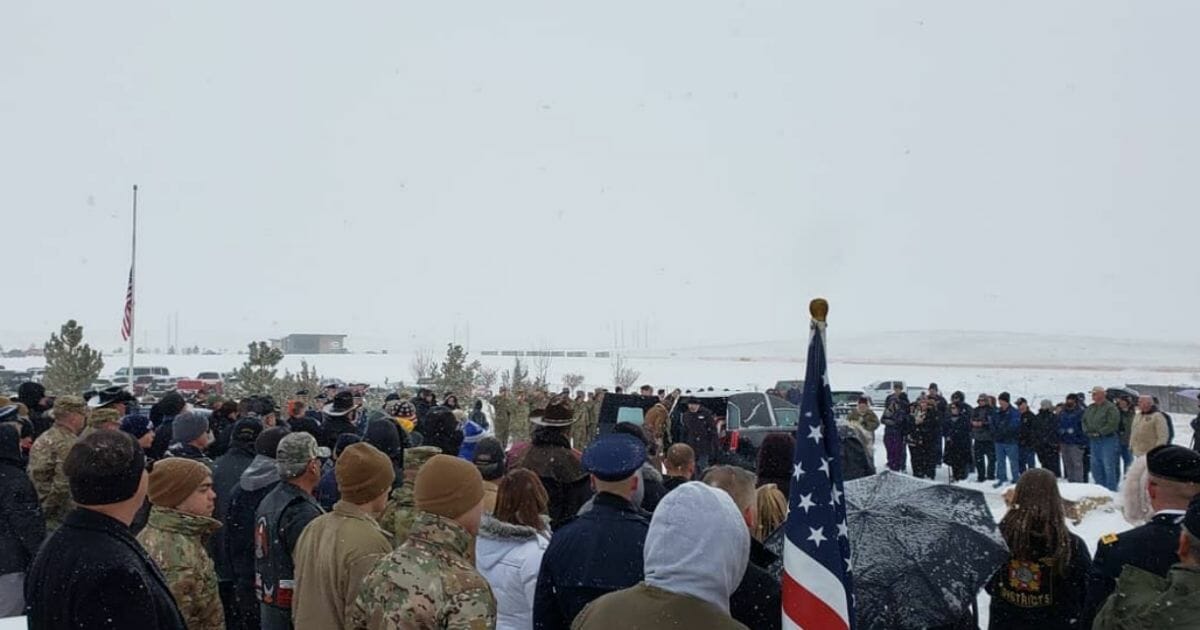 At the time of his passing, he had one family member left, even older than Baldwin, who would not be able to make it to the funeral.

Unwilling to let a man who fought for his country in the Korean War and served our country for a total of two decades be laid to rest silently and without fanfare, several groups rallied to open up the invitation to anyone who would like to attend his funeral, set for Feb. 7 at the Pikes Peak National Cemetery in Colorado.

“We have an unaccompanied Veteran with no known family members that is being laid to rest at Pikes Peak National Cemetery ‪on Friday Morning‬ (‪7 FEB 2020‬) at 0900,” the Cheyenne Mountain VFW Post 3917 shared on Feb. 3. “SSGT Clyde Baldwin (USAF Retired) served from 1950 to 1970. Please help get the word out for a good showing.”

The turnout turned out to be massive.

Hundreds of people — civilians, fellow veterans and active military — showed up to pay their respects even on a bitterly cold Friday morning.

Their patriotism seemed to keep them warm despite the falling snow.

“I’d like to call him a brother,” a man named Robert Aholt told KRDO.

“Even though I, myself, have not served in the military, I still feel like he’s part of our family.”

Others left the ceremony deeply moved, heading to Facebook to share their firsthand accounts of the event.

“Just finished up with a funeral for retired Staff Sergeant Clyde Baldwin of the USAF, who had no local family to attend his ceremony,” one user shared on Friday. “There was a public invitation to attend.”

RELATED: Teenager Left in Puddle of Tears When Military Brother Returns from Deployment To Surprise Her at School

“Expectations were low, as it’s snowing and cold. But Mother Nature couldn’t keep HUNDREDS of people from making sure he was sent off right. I mean there had to be over a hundred military (current and retired) alone. The flags, the bagpipes, the huge turnout… wow… incredibly touching.”

“Thank you to everyone who helped share all of the social media posts regarding an unaccompanied Veteran today,” another person shared. “Clyde was respectfully laid to rest this cold, beautiful & snowy Colorado morning. The military/Veteran community is simply incredible.”

“There were hundreds upon hundreds of cars full of people that literally flowed out of the cemetery and miles down the road. Our team at The Bridge Assisted Living was blessed to care for this humble, kind man over the last 3 years.”

You never would have known, looking at all the people who lined the way, that many of them had never met the veteran, but they were all bound by the same respect for him and their love of country.

“Beautiful ceremony today,” the Veterans Referring Veterans page added, along with photos of the well-attended funeral.

“Thank you to everyone that came out in support of SSGT Clyde Baldwin.”