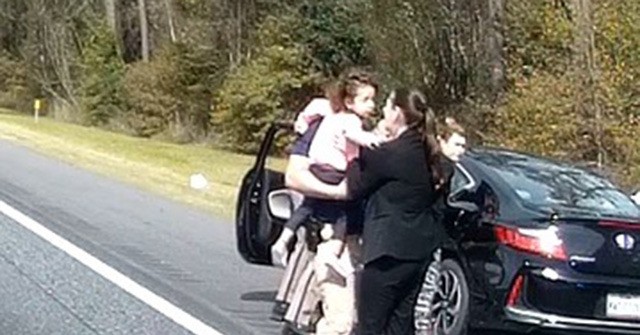 Police returned Lester Mejia’s daughter to him just hours after she was abducted from their driveway on Monday.

“It was anguish not knowing what was happening to my daughter,” Mejia told reporters on Monday night. At approximately 6 a.m., he had fastened his daughter into her car seat but forgotten his keys. As he ran into the house to retrieve them, he heard her scream.

Mejia emerged to see a black Honda with Texas license plates driving away with his little girl. He immediately jumped into his car and followed the vehicle along highway I-75, but was forced to give up pursuit when he realized he had left his phone behind.

The frantic dad rushed home to contact authorities, and an Amber Alert was issued by the Florida Department of Law Enforcement (FDLE) soon after. Fortunately, police soon spotted the vehicle driving through Tallahassee. FDLE agents and Florida Highway Patrol troopers stopped the vehicle and retrieved the child. Four adults were arrested — three men and one woman. In an official Facebook post, the FDLE said:

When the AMBER Alert went out, FDLE agents took to the air in our Cessna, searching for the suspects’ vehicle. Upon locating the vehicle, they radioed ahead to FDLE’s Tallahassee Regional Operations Center, who notified other law enforcement in the Tallahassee area of the suspects’ location. FDLE agents and Florida Highway Patrol troopers who were in the area looking for the missing child were then able to stop the vehicle on I-10 in Tallahassee, apprehending the suspects and safely recovering the child.

Of course, little Madeline “was scared,” Lt. Kim Montes said, calling it a “very traumatic” experience for the three-year old. Her father, however, is just grateful. “I’m happy for my baby coming back,” he said.