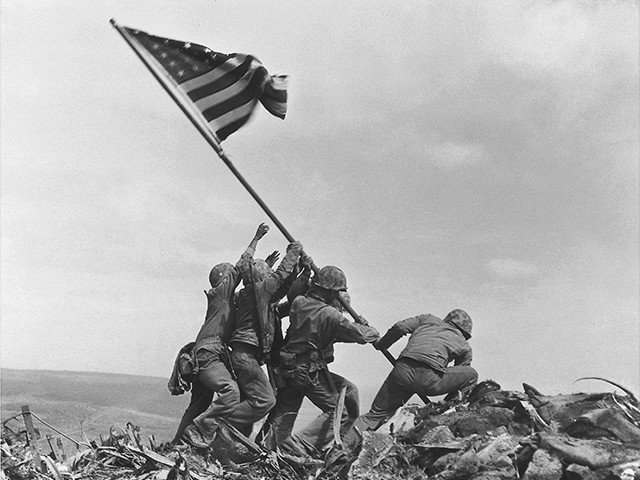 United States Marines raised the American flag atop Mount Suribachi during the battle for Iwo Jima 75 years ago today.

“During the bloody Battle for Iwo Jima, U.S. Marines from the 3rd Platoon, E Company, 2nd Battalion, 28th Regiment of the 5th Division take the crest of Mount Suribachi, the island’s highest peak and most strategic position, and raise the U.S. flag,” according to History.com.

Marine photographer Louis Lowery was with the men as they ascended the peak and recorded the initial event. The Americans cheered as the first flag was raised, and hours later more Marines came up the ridge with a larger one.

The second flag-raising was photographed by Associated Press (AP) photographer Joe Rosenthal and is considered one of the most famous war pictures in U.S. history, according to the National Archives website.

75 years today, AP photographer Joe Rosenthal captured what may be the most famous photograph of World War II: an image of six U.S. Marines raising the American flag atop Mount Suribachi on the Pacific island of Iwo Jima. https://t.co/KAttd29gXx pic.twitter.com/IWstrQh7Mn

The first wave of Marines rushed onto the beaches of the small Pacific island to fight for control and establish a base for aircraft and an emergency-landing site for bombers on February 19, 1945.

In the months prior, Japanese General Tadamichi Kuribayashi expected the Allies to move in and had constructed a system of underground tunnels, fortification, and artillery to withstand the impending bombardment.

However, 30,000 U.S. Marines established a solid beachhead on the first day and advanced inch by inch under heavy fire and suicidal charges by the Japanese infantry.

Many of the American’s enemies were never seen because they “remained underground manning artillery until they were blown apart by a grenade or rocket, or incinerated by a flame thrower,” according to History.com.

Despite the extreme danger, the brave Marines continued to advance across the island and on February 23, victoriously took Mount Suribachi.

When the fighting ended on March 26, more than 6,000 Americans had lost their lives and nearly 17,000 were wounded.

U.S. Marines tweeted a video to honor the 75th anniversary of the battle on Wednesday.

Today marks 75 years since the Marine Corps launched an amphibious assault onto the island of Iwo Jima, beginning one of the bloodiest battles in our nation’s history. Join us over the next 36 days as we honor the uncommon valor that was a common virtue because #WeAreIwo. pic.twitter.com/6h4ct5qpeo

The picture of the flag being raised atop Mount Suribachi “triggered a wave of national hope that Japanese forces would soon be crushed, and peace was near,” according to CNN.

You have this strong, diagonal line made by the flag staff. You have the flag snapping in the breeze. You have the pyramid-like shape of the Marines pushing the flag up. The men obviously are separate, but they appear as one. The blank background enhances the action by providing no distractions.

Also, the photo is gifted with a softly filtered light. A very thin haze of clouds filters the light so that the shadows aren’t harsh, but there is detail in all the shadows on the uniforms and the flag.

Rosenthal’s photo “captured the heroism of the whole World War,” Buell said, adding that “It captured a moment during a ferocious battle, and it looked to the future — to victory and the end of the war.”