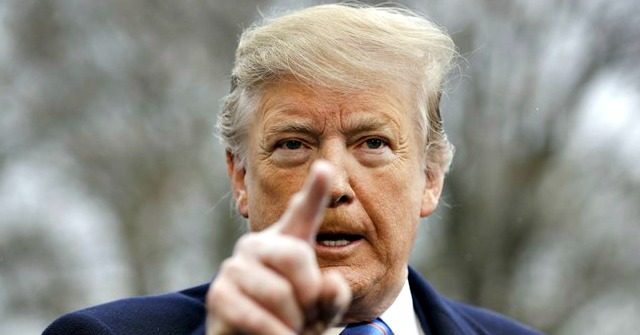 President Donald Trump blamed the World Health Organization on Tuesday for failing to properly prepare for the spread of the Chinese coronavirus.

“The W.H.O. really blew it,” Trump wrote. “For some reason, funded largely by the United States, yet very China-centric.”

Trump joins a growing chorus of Republicans criticizing the globalist body for being too favorable to China during the coronavirus outbreak, and even echoing state propaganda.

Sen. Rick Scott, a member of the Senate Homeland Security Committee announced Monday on Fox News he would investigate the World Health Organization for doing “work for communist China.”

“We will be giving that a good look,” Trump said.

Trump said he was glad he enacted a travel ban, despite the WHO telling his administration that it was not necessary.

“Fortunately I rejected their advice on keeping our borders open to China early on,” Trump wrote. “Why did they give us such a faulty recommendation?”

The W.H.O. really blew it. For some reason, funded largely by the United States, yet very China centric. We will be giving that a good look. Fortunately I rejected their advice on keeping our borders open to China early on. Why did they give us such a faulty recommendation?

Trump’s decision to condemn the World Health Organization differs from Dr. Anthony Fauci, who has admitted problems with the WHO in the past but has backed director general Tedros Adhanom Ghebreyesus as an “outstanding person.”

“Obviously over the years, anyone who says that the WHO has not had problems has not been watching the WHO,” Fauci said in March. “But I think that under his leadership, they’ve done very well. He has been all over this.”