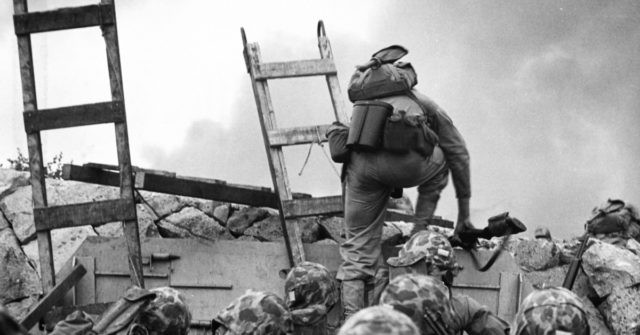 China’s state newspaper China Daily – typically one of the least belligerent in the stable of Communist Party-run outlets – published a column Thursday claiming America had a history of “bacteriological warfare” to imply the possibility the Chinese coronavirus pandemic was created by the U.S. military.

The article, whose central thesis is that Washington is incompetent in facing health emergencies, claims “U.S. politicians feel no shame in ignoring the truth” and that America generally has found “failure to effectively cope with the pandemic while China manages to curb domestic cases.” The article accuses American politicians of attacking China to distract from their inability to curb the disease, a common claim in Chinese media.

American politicians – primarily Secretary of State Mike Pompeo – have noted in public that China silenced medical experts who warned of the outbreak of a contagious disease in Wuhan, China, early on the pandemic, and that China destroyed early samples of the virus, making it difficult if not impossible for scientists to trace its evolution. The China Daily column responded to these allegations, some of which China does not deny, by claiming falsely that the United States used biological weapons during the Korean War.

“[T]he media outlets that prop up a blame game by the world’s single hegemonic power are forgetting that it was the U.S. that is alleged to have engaged in bacteriological warfare against Korean and Chinese soldiers during the Korean War (1950-53) and against the Vietnamese (1955-75),” author Rod P. Kapunan, a “Manila-based political analyst,” wrote. “It was the US and some other Western powers that framed people in Iraq and Syria for alleged possession of chemical weapons.”

“Yet the country that was the first to confront the coronavirus and the first to successfully combat the new challenge through its own initiative is today being condemned as the cause of the pandemic,” he claimed.

China, the Soviet Union, and North Korea have spread outrageous rumors for the past 70 years of American military officials using insects in biological warfare during the Korean War. Repeatedly, these countries refused to allow the World Health Organization (W.H.O.) and other global bodies to investigate the areas where the alleged biological warfare occurred, instead using Soviet puppet institutions to claim evidence existed substantiating their claims.

In 1998, documents from the former Soviet Central Committee surfaced revealing the claims to be false. Documents by several Chinese officials similarly revealed that no evidence existed of American biological warfare in the Korean War.

The Wilson Center revealed in a 2016 report that at least one journalist present in North Korea at the time said he saw Chinese soldiers planting “paper packets of insects,” the alleged evidence of American warfare bugs deployed against the Koreans.

The Organization for the Prohibition of Chemical Weapons (OPCW) has also released several reports on the matter.

The China Daily article did not elaborate on any relationship between the Syrian Civil War and the Chinese coronavirus pandemic. It concluded that those criticizing the Communist Party were guilty of “extreme bigotry, blind superiority, discrimination and contempt of others.”

“Those strongmen and so-called intelligentsia in the West cannot accept China or any other Asian or African country leading in charting the course of human destiny. They cannot conceive of the idea that the awaited emergence of China as an economic power should be welcomed as an epochal change in the history of mankind,” the column asserted.

The Global Times, typically the Chinese government’s most aggressive English-language publication, also published a scathing piece on Thursday insisting that the United States suffered from a “disdain for science” that has resulted in a much higher Chinese coronavirus case count than anywhere else.

“[S]ome said it might be the continual suppression of scientists, spiraling online rumors and conspiracies that have accelerated the downfall of public trust in science when the world needs it most to fight this war that threatens innocent lives,” the Global Times proclaimed.

The newspaper urged people to “show respect to prominent medical professionals and scientists.”

In Wuhan, where the virus originated, Chinese officials immediately arrested eight doctors and health workers for posting advice on social media on how to prevent the spread of contagious disease in January. One of those doctors, Dr. Li Wenliang, became globally renowned after mysteriously dying shortly after his release from police custody, which came accompanied by a profuse apology for encouraging doctors to wear protective gear and wash hands.

Another doctor, Dr. Ai Fen, disappeared for weeks after criticizing China’s cover-up of the outbreak. She recently surfaced in a social media video many have speculated may be staged.

China currently claims it has documented 83,944 cases of coronavirus nationwide and 4,637 deaths, the vast majority in Wuhan’s Hubei province. The global scientific community doubts these numbers; one study found the real number of cases in China may be closer to 3 million.