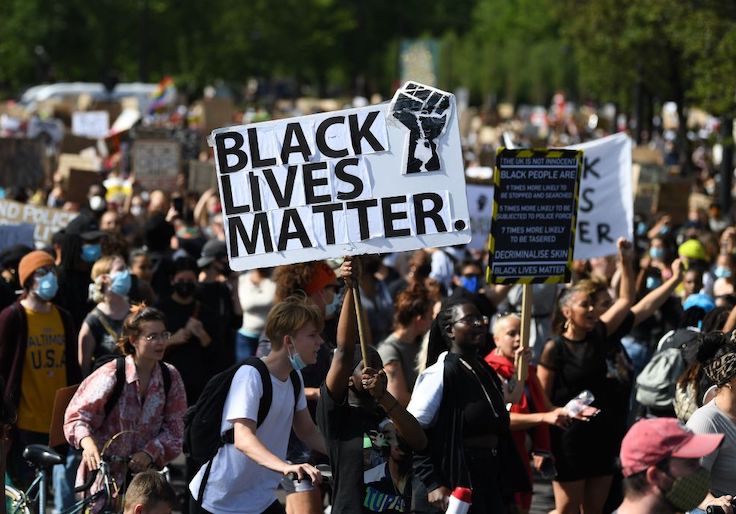 The left-wing activist and former Bernie Sanders surrogate Shaun King is among the most visible faces of the Black Lives Matter movement. The former Daily Kos blogger is also one of its prominent fundraisers: In 2017, King founded a political action committee—the Real Justice PAC—with an eye toward driving criminal-justice reform across the country using the same mass mobilization techniques employed by the Sanders campaign.

But over the past 15 months, the Real Justice PAC, staffed by a number of left-wing activists, has funneled a quarter of the money it has brought in back to companies linked to PAC leaders.

Since January of 2019, the PAC has cut dozens of checks totaling more than $460,000 to three political consultancy firms linked to PAC employees. The PAC’s data strategist, Jin Ding, and its treasurer, Becky Bond, manage two of them: Social Practice LLC and Bernal Alto LLC. The third—Middle Seat Consulting—was cofounded by one of the PAC’s original leaders, Hector Sigala.

"There are legal and ethical ways to have people in leadership positions at an organization also serve as vendors to the same organization," Scott Walter, president of the Capital Research Center, a money-in-politics watchdog, told the Washington Free Beacon. "But these relationships properly raise questions, especially for a group whose leaders include someone like Shaun King, who has repeatedly been accused of enriching himself improperly."

"For 501(c)(3) charities, the IRS actually prohibits what’s called ‘private inurement’ or excessive benefit to an individual from the organization’s coffers," Walter said. "Real Justice PAC isn’t a nonprofit overseen by the IRS but a PAC overseen by the Federal Election Commission, which so far as I know doesn’t have such a strict regulation. Still, groups like Real Justice that routinely criticize their opponents for things like ‘dark money’ influence—should be prepared to defend practices that let leaders write checks to their own for-profit consultancies."

Ding, the PAC’s technology strategist, is registered as the manager for the California-based Social Practice LLC and Bernal Alto LLC in the firms’ state filings. Social Practice received nearly $250,000 from Real Justice PAC this cycle for campaign consulting and digital services. Bernal Alto, which dissolved earlier this year, was paid $20,000 for consulting and organizing services. Bond, a cofounder of the PAC and former senior adviser to Bernie Sanders’s 2016 presidential campaign, is also listed as a manager for both companies. Progressive digital firm Middle Seat Consulting, which was cofounded by Sigala, received $193,000 from the PAC for advertising services.

While it does not appear that King is personally profiting from Real Justice PAC’s payments, the activist has faced accusations of pocketing money he fundraised for Haitian orphans and the families of black individuals killed by police. "Some of that money went to survivors or victims’ families, but much of the largess either went into failed projects, King’s own pockets, or is unaccounted for," the Daily Beast reported in 2019. King called the accusations "bulls—t" and said that "people need to understand that failure is not fraud." King promised to release records of where he spent fundraised money in March of last year, but never did.

Real Justice PAC’s profile has grown amid widespread protests against racism and police violence. The group claimed it has seen an influx of new donations—though it did not specify the amount—and is featured on donation-guide lists for Black Lives Matter supporters.

The financial arrangement is in keeping with the PAC’s previous practices. During the 2018 election cycle, the PAC sent more than half a million dollars to Bernal Alto and Middle Seat, according to the Daily Caller, and the continued payments could raise questions about how the PAC will use its windfall of new donations.

In previous cycles Real Justice PAC has been pivotal in helping elect far-left district attorneys. In 2017 it provided outside fundraising services for far-left Philadelphia DA candidate Larry Krasner, who went on to win. The group backed a slew of other left-wing candidates including San Francisco DA Chesa Boudin and state’s attorney for Cook County, Ill., Kim Foxx.

King, Bond, and several others formed Real Justice PAC in 2017 with the goal of "fighting structural racism." It has since worked alongside George Soros’s criminal justice PAC on DA contests across the country. Those efforts have given many far-left candidates major money advantages in their races. Real Justice has pulled in nearly $2 million so far this cycle. Much of that sum came from Cari Tuna, the wife of Facebook cofounder Dustin Moskovitz. Tuna was also the PAC’s first donor.

Tuna’s foundation, the Open Philanthropy Action Fund, made a $750,000 contribution to the PAC in October. Tuna has directly donated another $50,000. The PAC has also received $100,000 this cycle from the Sixteen Thirty Fund, a dark money group that falls under the umbrella of Arabella Advisors, a massive D.C.-based network wealthy Democratic donors use to conceal the sources of hundreds of millions donated to liberal groups and initiatives every year.

The Real Justice PAC did not respond to a request for comment on the payments.

The post BLM Activists Are Funneling Donations Back to Their Own Companies, Documents Show appeared first on Washington Free Beacon.