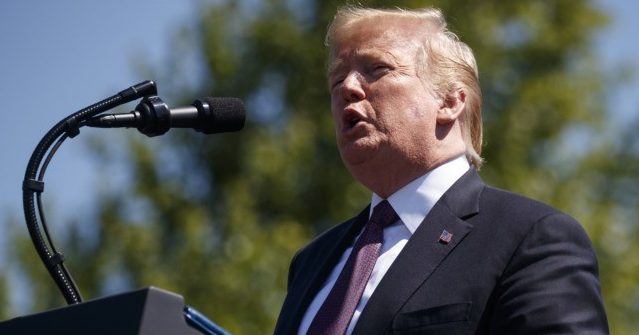 On Thursday morning, Trump told reporters at the White House that he will soon announce “my biggest statement” on border security. “This is a big league statement. We are going to do something very dramatic on the border.”

The announcement will likely reveal that White House officials have drafted a regulation barring asylum seekers who cross a safe country to reach the United States border, according to Politico.

The regulation, if it survives multiple court challenges, would effectively exclude the growing wave of Central American migrants who travel through Mexico — often on chartered buses — to exploit the various catch-and-release rules that let them get job permits.

A draft proposal circulating among Trump’s Homeland Security advisers would prohibit migrants from seeking asylum if they have transited through a country other than their own before coming to the U.S., according to a DHS official and an outside advocate familiar with the plan. If executed, it would deny asylum to thousands of migrants waiting just south of the border, many of whom have trekked a perilous journey through Mexico.

Trump alluded to the asylum changes Thursday as he departed for Colorado, telling reporters he is “going to do something very dramatic on the border.”

While Trump aides believe they can make the changes through an administrative rule, they are also seeking a legislative fix that would be far less vulnerable to a court challenge. Similar language is expected to be included in Trump’s new immigration bill that would boost security at the southern border and push the nation to admit more high-skilled, well-educated immigrants, rather than immigrants who enter the U.S. based on family ties, according to two people familiar with the proposal.

A regulatory shift could require a long fight in the courts, said a border-law expert.

“The Attorney General could issue a decision on certification that denied [asylum] applications in the exercise of discretion, but even that would require overturning years of case law and require a change in USCIS policy,” said Andrew Arthur, a former immigration judge who works with the Cente for Immigration Studies. “What he could do is require [migrants] to apply for asylum at the consulates, either in their country or in Mexico.”

The rush of migrants into U.S. workplaces and schools has spiked in 2019 because the cartels, the migrants, the border agencies and the voters know that Congress is refusing to block the catch-and-release loopholes which are delivering hundreds of thousands of cheap workers to their political allies and their donors.

The migration may reach 800,000 in the 12 months up to October. That number includes at least 400,000 extra workers and at least 200,000 children for placement in K-12 schools used by the children of America’s blue-collar communities.

The migration means that employers quickly get an extra supply of tough, compliant, low-wage workers just as labor shortages are forcing companies to boost pay for Americans. The extra labor supply also reduces employers’ incentive to hire from the population of 12 million unemployed or underemployed Americans, some of whom are sidelined by disability, underinvestment in rural areas, or drugs.

Trump’s deputies are trying many options to stop the inflow, which is backed by Democrats and many GOP legislators. For example, officials are blocking some migrants from jobs to repay their smuggling costs by requiring them to wait in Mexico while their asylum appeals are processed. Officials are also trying to write a regulation to replace the 2015 Flores decision by a judge which bars the detention of migrant adults for more than 20 days if they bring a child across the border.

The government also prints out more than one million work permits for foreigners, tolerates about eight million illegal workers, and does not punish companies for employing the hundreds of thousands of illegal migrants who sneak across the border or overstay their legal visas each year.

This policy of inflating the labor supply boosts economic growth for investors because it ensures that employers do not have to compete for American workers by offering higher wages and better working conditions.

This policy of flooding the market with cheap, foreign, white-collar graduates and blue-collar labor also shifts enormous wealth from young employees towards older investors, even as it also widens wealth gaps, reduces high-tech investment, increases state and local tax burdens, and hurts children’s schools and college educations. It also pushes Americans away from high-tech careers and sidelines millions of marginalized Americans, including many who are now struggling with fentanyl addictions. The labor policy also moves business investment and wealth from the heartland to the coastal cities, explodes rents and housing costs, shrivels real estate values in the Midwest, and rewards investors for creating low-tech, labor-intensive workplaces.