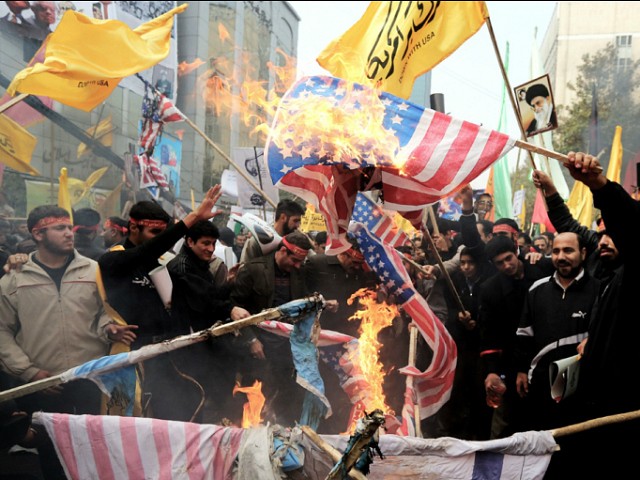 A senior Muslim cleric in the Iranian city of Yasoujhas sought to reassure U.S. citizens that when Iranians chant bloodcurdling threats of “Death to America”  it does not mean death to all the American people – just some.

Rather, he said it means death to American leaders past and present – including Presidents Trump, Obama, George W. Bush and George H.W. Bush – so normal citizens should not be afraid of Iran’s vengeance.

Ali Asghar Hosseini added his hope that this slogan will be realized sooner rather than later but he is prepared to wait.

He then chanted: “Death to the leaders of America!” to ensure nobody in the U.S. would be unsure of the exact nature of his call.

The sermon aired on Dena TV (Iran) and was released by the Middle East Media Research Institute (MEMRI).

Chanting “Death to America” is a popular pastime in Iran, sometimes used as a greeting between friends and at other times as an opener or closer to large public gatherings.

Family events are also common venues for the chant where it is used to enliven proceedings.

In August, Iranians who gathered in Islam’s holy city of Mecca in Saudi Arabia for the annual hajj pilgrimage called for Israel’s destruction as well as they as they chanted “Death to America,” as Breitbart News reported.

At a “disavowal of polytheists” ceremony in Mecca, the reading of a message from Iran’s Supreme Leader Ali Khamenei reportedly prompted the crowd of Iranian hajj pilgrims to spontaneously chant, “Death to America! Death to Israel! … America is the enemy of Allah! Israel is the enemy of Allah [and] should be erased from the face of the Earth!”

Iranian Pilgrims in Mecca “Disavow Polytheists,” Chant “Death to America,” Declare Israel Must Be Erased from the Face of the Earth pic.twitter.com/20w0R2QVdd

In April, Iranian lawmakers opened a new session of the country’s Parliament with chants of “Death to America.”

The taunt was meant as a response to the White House’s designation of Iran’s elite paramilitary Islamic Revolution Guard Corps (IRGC) a foreign terrorist organization.

Iran’s Supreme National Security Council also registered its displeasure by calling the U.S. Central Command, known as CENTCOM, and all its forces as “terrorists”, and labeling the U.S. a “supporter of terrorism.”