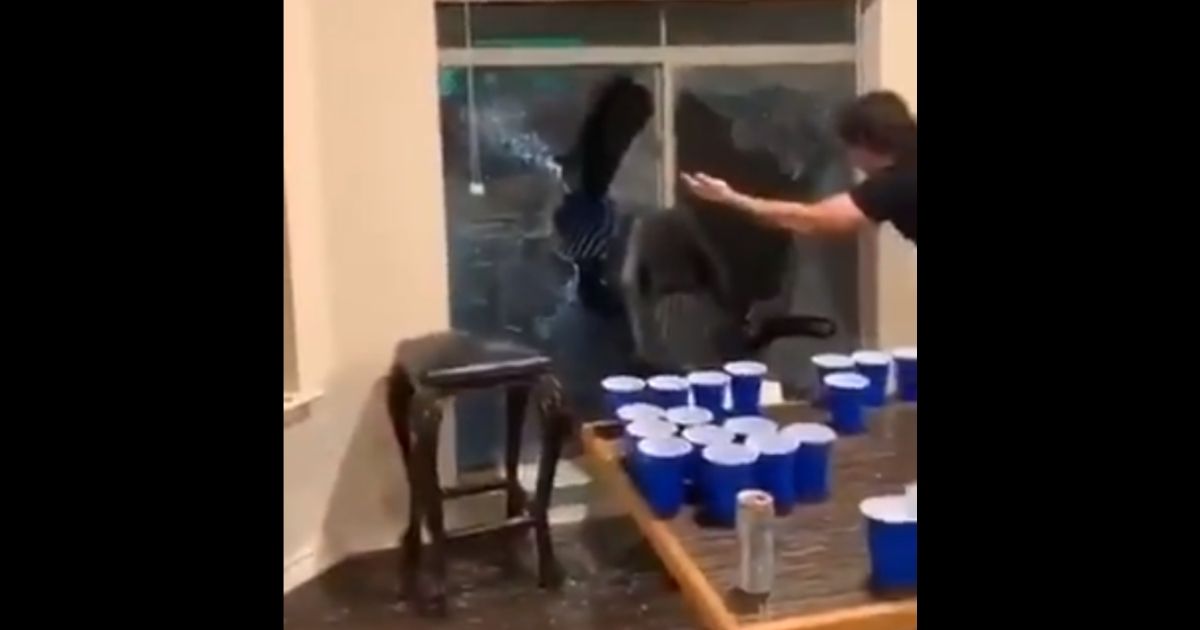 When a rioter breaks your window and you tell them that you’re on their side, what side are you really on?

I don’t necessarily ask that rhetorically, because I’m genuinely curious what a group of viral partiers thought they were endorsing when members of a passing demonstration threw rocks through their window.

Neither the place nor the people are identified in the clip, which gained widespread notoriety when it was tweeted by conservative filmmaker Ami Horowitz. While it’s difficult, therefore, to fully vouch for its provenance, it’d likely be difficult to fake for reasons that’ll quickly become clear.

The setup: Several individuals, all apparently male, all apparently white, are having some kind of party. A few floors below, a steady stream of protesters pass on the road.

The person recording can be seen giving the thumbs-up sign to the protesters. Less than a second later, a projectile comes crashing through the adjacent window. The thumb goes down.

“We’re on your side!” one of our woke protagonists yells.

Another projectile crashes through the other window.

WARNING: The following video contains graphic language that some viewers will find offensive.

This is so nuts. Sad, but kind of hilarious pic.twitter.com/9fHBDX8FP9

“Holy s—! We’re on your side!” our bro friend shouts, apparently now sufficiently distracted from what appears to be a game of beer pong in progress. “We’re on your f—ing side! What the f—?”

There’s a certain subset of viral clips to have emerged from the riots that have an aspect of gallows humor to them. Yes, there’s a grim laugh to be had when the tenuous inanities we’ve been sold about the nature of the protests and how one can be an effective activist or ally go poof.

The incredulity of our virtue-signaling Chads that their windows got broken by protesters with whom they felt themselves aligned certainly qualifies for a bad laugh, yes. But it goes deeper.

“Holy s—! We’re on your side!” Whose side? And for what purposes?

People have the right to peaceably assemble and demonstrate for a redress of their concerns.

RELATED: Writer for ‘Progressive Newspaper’ Learns About Riots the Hard Way When Office Gets Destroyed

This is another grim irony of the matter: Conservatives were saying this several weeks ago while exercising those rights and, because we exercised those rights, we were branded as retrograde bigots who were killing grandma. (It’s worth pointing out yet again that the nature of the novel coronavirus hasn’t changed in the interim, just the motivating factor behind the respective protests. But I digress.)

Every single one of those protesters had, under the First Amendment, the right to be out on the streets provided there was no imminent danger to life, limb or property being caused by any element of the protest. Was this what these woke young men were cheering on?

Not really. Notice whose “side” they were on: that of the individual or individuals who threw projectiles through their windows.

The cri de coeur from our party bro wasn’t: “Why are you destroying property?”

Instead, it was: “Why are you destroying our property?”

Yes, this happened quickly enough that it almost could have been a TikTok video. I suppose the person doing the virtue signaling here didn’t have the time to think about the words coming out of his mouth. That said, the first thing that came to his mind says a great deal about his mindset.

It’s fair to say that, at least on the part of whoever destroyed these windows, this demonstration wasn’t about keeping the memory of George Floyd alive, holding those responsible for his death accountable and calling for policy changes that reduce the chances of police brutality. Bricks and rocks don’t accomplish that.

Should police do more to stop violent protests?

Some individuals, however, have come to conflate the two.

Others seem to pooh-pooh the property damage because it’s a minority of protesters. This may indeed be true, but what do you think a shiny-object news media is going to give more play to?

Time after time, we see an anchor assuring us just how peaceful these protests are — quite often in front of a burnt-out family business or the charred shell of a police cruiser. We know what they’re there for, and it’s not to soak in the peacefulness.

At this point, it’s rather moot to argue over whether cities could or should have taken control of the situation. To recycle a metaphor, it seems we’ve bent the curve on violent protests; while some still remain, the damage has been done and the moment for civic authorities to take control has passed. At least, unfortunately, that’s the best we can hope for at this point.

Arguing over what should have been done to effectively maintain control is sadly academic. The only thing we should be talking about is how, in all of this, we’ve lost sight of the reason for the protests in the first place.

However, let this video be a reminder of the kind of woke mindset that excused so much lawlessness.

As long as the property-destroying type of protester remained in the abstract for this gentleman, he was just fine with it. Once it became more concrete, he wasn’t quite as cool with it.

As for getting justice for George Floyd — well, who’s he again?