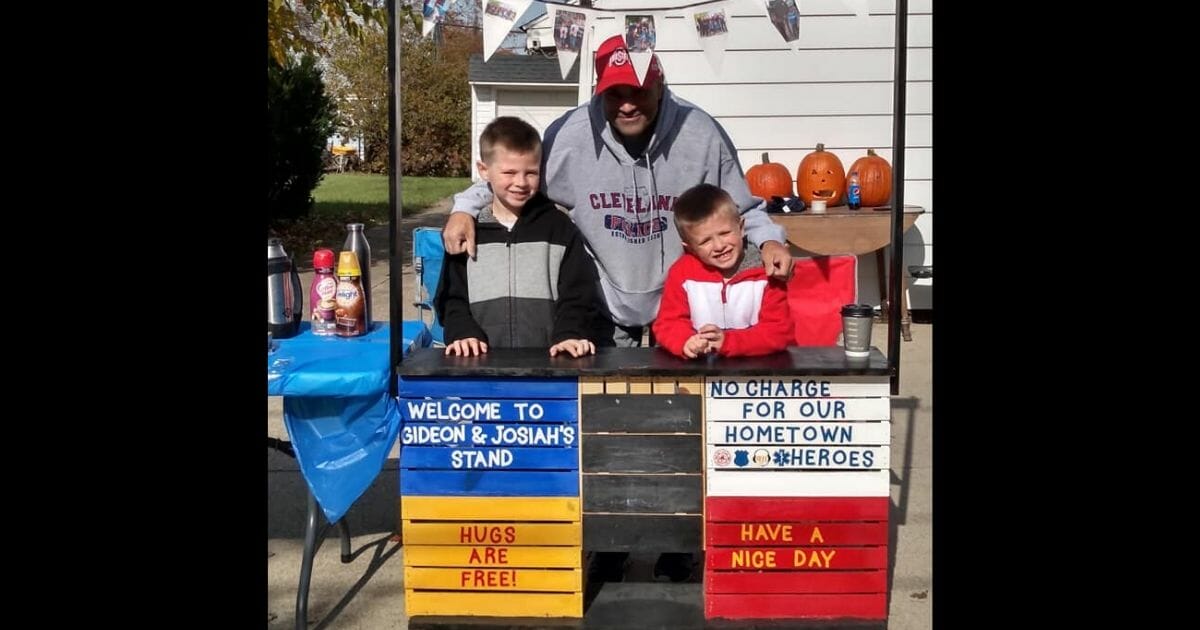 After two young brothers near Cleveland, Ohio, heard about a local police officer battling cancer, they felt moved to help.

Josiah and Gideon Trank have always looked up to those who serve in uniform, according to their mother Machelle Trank.

“First responders, military … their eyes light up when they see their heroes,” she told The Western Journal.

They respect first responders so much so that they decided to hold a lemonade stand in the summer of 2018 and gave the proceeds to a fallen officer’s family.

But when they found out about Cleveland Officer David Muniz’s fight against cancer in early November, it was too cold outside for lemonade.

The boys were determined, however, and suggested a hot chocolate stand instead.

Officer Muniz was diagnosed with Non-Hodgkin’s Lymphoma after getting shot while on duty, according to WKYC.

He’s been fighting against that devastating diagnosis since 2017, and when Josiah and Gideon heard about his fight in 2019, they knew they wanted to help.

So with the help of their mother, they set up a hot chocolate stand on Nov. 4 and pledged to put the proceeds toward Officer Muniz’s treatment costs.

“I want him to know he is not alone, we are here, and we can help,” Gideon told WJW.

The boys charged $1 for a cup of hot chocolate, but offered free drinks to police officers and military members. Free hugs were also offered.

While they were running their stand, a special visitor came to say hello: Officer Muniz.

The brothers’ hot chocolate stand wasn’t as busy as they had hoped, but Machelle said it was probably slow because it was a Monday.

“They had a goal of $500 but didn’t come close to reaching it,” she told The Western Journal.

“They were still very excited for what they raised and seeing the happiness on their faces as they put the money in an envelope and getting to meet Officer Muniz definitely made it successful for them!”

Since then, the boys have been able to keep in contact with Officer Muniz and even gave him a special Christmas gift.

While there are no specific fundraising plans in the future, Machelle said she wouldn’t be surprised if her sons decide to run a lemonade stand in the spring for Officer Muniz.

Right now, the family is focused on a police-themed Christmas tree in the yard, at Josiah and Gideon’s request.

“I made thin blue line ornaments with all of the officers names they’ve come to know and love,” Machelle said. “They asked to get blue lights and add the ornaments so the officers know they are in their thoughts this holiday season.”

Machelle said she’s proud of her sons’ hearts toward these hometown heroes and their drive to show their appreciation.

“I love their hearts,” she said. “I wish I could capture the love and excitement in their eyes when they want to do something.”