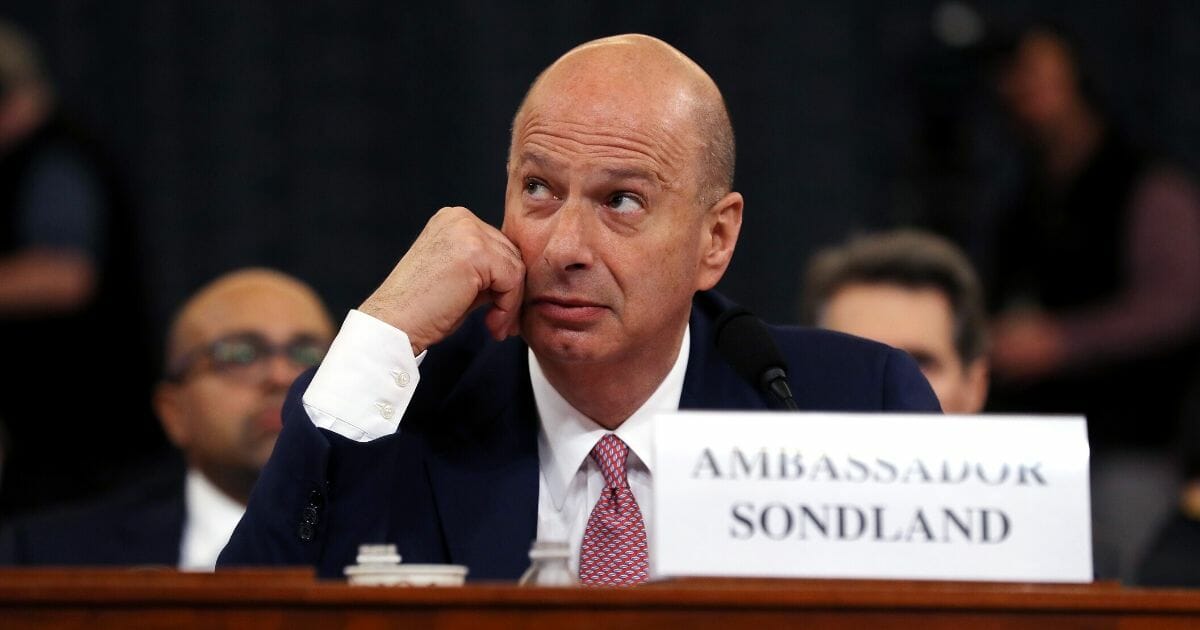 The USA Today headline from Nov. 21 says it all: “Jocular and unflappable, Sondland makes splash as star witness in impeachment inquiry.”

America’s ambassador to the European Union Gordon Sondland “exuded self-assurance” during his six hours in front of the House Intelligence Committee, saying that Rudy Giuliani orchestrated a quid pro quo whereby money for Ukrainian defense would only be released if the Ukrainians agreed to announce an investigation into Joe Biden. He also said he kept Secretary of State Mike Pompeo in the loop about the policy toward Kyiv, among other things.

He quickly became California Rep. Adam Schiff’s star witness, an unimpeachable lodestar pointing toward impeachment. Yes, there were sources that mentioned that until recently, he was pretty much a Trumpster through and through — and a rich hotelier at that. They also mentioned that he was a major Trump donor before he became an ambassador — because that’s never happened before and they all complained about it under the former administrations.

Well, whether or not it has any impact, one part of the calculus just changed: Sondland isn’t unimpeachable anymore, and his behavior doesn’t necessarily seem so jocular or unflappable.

The misconduct, it must be noted, took place well before Sondland’s role in the Trump administration; the three women detailed unwanted advances and indecent exposure, among other things, between 2003 and 2011.

“In one case, a potential business partner recalls that Sondland took her to tour a room in a hotel he owns, only to then grab her face and try to kiss her. After she rejected him, Sondland backtracked on investing in her business,” the ProPublica report states.

“Another woman, a work associate at the time, says Sondland exposed himself to her during a business interaction. She also recalls falling over the back of a couch trying to get away from him. After she made her lack of interest clear, she says Sondland called her, screaming about her job performance.

Does this make you re-evaluate Gordon Sondland’s testimony?

“A third woman, 27 years Sondland’s junior, met him to discuss a potential job. She says he pushed himself against her and kissed her. She shoved him away. She says his job help stopped.”

The three women were identified as Jana Solis, Natalie Sept and Nicole Vogel. Sondland and his legal team attacked the report because, in part, Vogel is the owner of Portland Monthly — the publication that assisted ProPublica in their investigation.

“It is distressing that this underhanded journalism was initiated by a source angry that I long ago declined to invest in her magazine, the same magazine now presenting its owner’s outlandish claims as if the reporting is somehow objective,” Sondland said in a statement.

The ambassador also said that the claims were politically motivated.

“In decades of my career in business and civic affairs, my conduct can be affirmed by hundreds of employees and colleagues with whom I have worked in countless circumstances. These untrue claims of unwanted touching and kissing are concocted and, I believe, coordinated for political purposes. They have no basis in fact, and I categorically deny them,” the statement read.

According to The New York Times, Vogel had no part in either the decision to pursue the story or the editorial decisions made by Portland Monthly.

Sept, meanwhile, implied the response from Sondland was an insult.

“I never met either of the other two women, yet each of our stories contained corroborative elements, which were recounted in the ProPublica and Portland Monthly story,” she said.

“I’m coming forward now so other women can tell their stories, and be believed.”

She added that she was “haunted by this experience — especially since seeing Sondland’s confirmation as ambassador.”

The details aren’t pretty. In the case of Solis, she says she met him in 2008 after a colleague set up a meeting with Sondland since Solis had experience in the hotel industry.

As they were leaving, Solis says that Sondland “slap[ped] me on the ass and said, ‘I look forward to working with you.’”

She was then asked to his home where she was supposed to do an art valuation even though she had no experience in the field.

“The two toured Sondland’s home in Portland’s exclusive West Hills, Solis making notes about the artwork as the hotelier showed off pictures of himself with then-President George W. Bush and Bush’s dog,” ProPublica reported. “And then, she recalls, he told her there was even more of his collection to see in the pool house. She’d meet him there, she said, excusing herself both to go to the bathroom and map out a potential exit strategy.”

“I get out to the pool house, and he is now naked from the waist down,” she said. “He said something about, ‘I thought we could chat.’ And I said something, trying to keep his ego intact — not that he needed that, not that it wouldn’t have been anyway — I said something like, ‘I can’t have that conversation.’”

Solis says that on another occasion, Sondland tried to force himself on her in his penthouse.

”The next thing I know, he’s all over me,” she said. “He’s on top of me. He’s kissing me, shoving his tongue down my throat. And I’m trying to wiggle out from under him, and the next thing you know, I’m sort of rising up to get away from him, and I fall over the back of the couch.”

The other women told similar stories of Sondland trying to force himself on them in professional situations — usually as they were at his mercy when it came to issues of investment or employment.

“There were a lot of indecent proposals when I was raising capital, but none as brazen as his,” Vogel said of Sondland trying to force himself on her. She confided in her sister and a friend at the time, both of whom confirmed her story.

“I think she was just exhausted,” Lorrie Vogel, Nicole’s sister, says. “All you’re trying to do is raise funding for something, and you’re appalled that people would use their power to try and take advantage of you.”

So, what does this mean for Sondland and the impact of his testimony on the impeachment inquiry? I suppose it’s an open question — except that the question has barely been asked. The whole thing has been treated as a giant shrug emoji. Sure, it’s gotten coverage, but the reaction has mostly been, “Well, there it is.”

And let’s not forget the fact that Sondland’s attorney basically accused all three women of making the accusations for pecuniary reasons.

“Notably, what each of these three women share in common is that they pursued Ambassador Sondland for financial and personal gain — an investment, a job, and insurance brokerage work — and he declined their proposals,” Sondland lawyer Jim McDermott said in a statement to ProPublica.

“Given the timing of your intended story, a reasonable conclusion to be drawn is that you are attempting to affect Ambassador Sondland’s credibility as a fact witness in the pending impeachment inquiry,” he added.

“Given the politically charged climate in which current events are unfolding, some might consider this to be veiled witness tampering.”

Witness tampering? Well, there’s a new one. Never say lawyers aren’t involved in a creative field. However, consider this much: If any other political figure’s lawyer accused three separate women who have never met of getting revenge on Sondland because of money, both the attorney and his client would be dragged through the mud like nothing else.

I assure you, were this any other witness in any other impeachment inquiry (granted, there’s a small sample size, but) we’d be putting the brakes on everything.

Without Sondland — or rather, without Sondland as a spotless-ish truth-teller who came in from the cold — the impeachment case looks a lot like hearsay. I wouldn’t say it’s been made with Sondland, mind you, but without him, this is going to look a lot more difficult.

Is that part of the equation here? Or do we simply not care about these things when they don’t make a point?

We’ll see where this all goes, if anywhere. An associate of Sondland’s told Politico that he has no plans to resign his position. My guess is that this mostly disappears — which is unfair. This isn’t necessarily irrelevant to who Sondland is.

“I have nothing to say about what he did or didn’t do [involving Ukraine],” Vogel said. “But if people are asking what his moral character is, I have one more piece of evidence for them.”